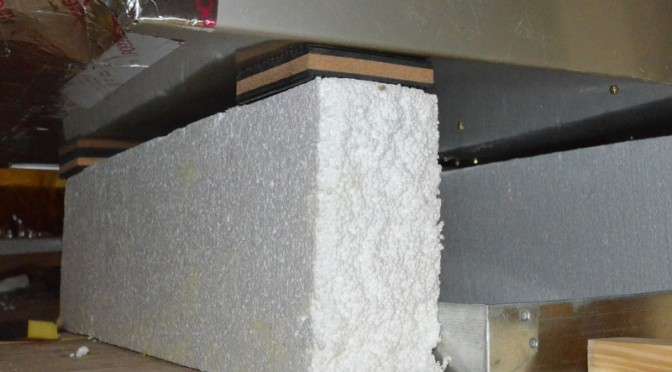 The HVAC team from Elite Heating & Air Conditioning is installing the ducts that will push heated and cooled air across the house.

Ron and Steve walked Emerald Hill, adjusting vents too close to ceiling fans or ceiling lights and, more important, spotting tight kinks in the flexible ducts that will restrict airflow.

There are several — two or more 90-degree turns back to back that twist duct from chase to ceiling bay, or two runs of duct compressed into chases that are undersized. And one duct run between the kitchen and mudroom appears to be crammed into the tight space under the lower roof, possibly extending outside the insulation envelope of the house while compressed between lumber runs.

It takes an hour talking through and testing various alternatives at several locations to resolve upon an easy solution — reframe the vertical chases to make them wider. For example, in the master bath on the second floor, there are two ducts that travel from the attic down to the kitchen, one to supply air to the mudroom and mudroom bath, and one to supply air to the kitchen. They squeeze against each other, compressed, kinked around tight turns and holes carved into the bathroom subfloor.  Steven volunteers another 12 or so inches out of the master bath wall that will be used for storage, towel bars and benches. The benches just won’t be as wide, that’s all — no big deal. That allows Ron to relocate one of the two duct runs into a second ceiling bay above the kitchen, decompressing the two ducts, solving airflow issues in two rooms on the first floor.

There’s a nearly identical issue across the house at the loft, where the copper pipes between the air handler in the attic and the compressor outside are going to be crammed into a 12×12 vertical chase shared with a flexible duct. The easy solution, again, is for Steven to volunteer to give up 12 inches or so for Ron to reframe a larger chase.

Downstairs, Ron and Steve ponder a different issue with Daneel from Elite Heating & Air Conditioning. The vertical chase in the laundry/utility room on the second floor delivers a flexible duct into the ceiling of the library/dining room on the first floor, directly over the planned location for the table, smack in the middle between two ceiling lights — and eight feet distant from a better location closer to the front windows. At the same time, adjacent to the library, per the plans, there are only two vents — one at each end — planned for the large “great room” created by combining the kitchen and family room. Daneel and Steve step upstairs to talk about adding another chase by taking space from bedroom 4, to potentially run a third air vent down to the great room. Daneel suggests a better solution — enlarge the vertical chase in the laundry room to enable Elite to run two ducts side by side from the attic down to the library. Then, in the bay between two ceiling joists in the library ceiling, turn the ducts in opposite directions — one toward the front windows, away from the dining table, and one toward the family room, where it can terminate in a new, third vent just about dead center of that room and nearly equidistant between the vents at each end of the great room.

In the interim, Elite is responding to Steven’s request for better isolation of the HVAC system from the framing of the house, to reduce the possibility that vibrations from the system operating in the attic do not travel into the framing, to be conducted as noise.

How did Steven learn to ask about isolation and spot kinks in duct runs? Lessons learned when Carrier dispatched a regional rep to determine why the HVAC system at Sea Eagle View was a “carcass” that required total replacement. Which does not make Steven a licensed expert installer of HVAC equipment — for the record — just experienced.