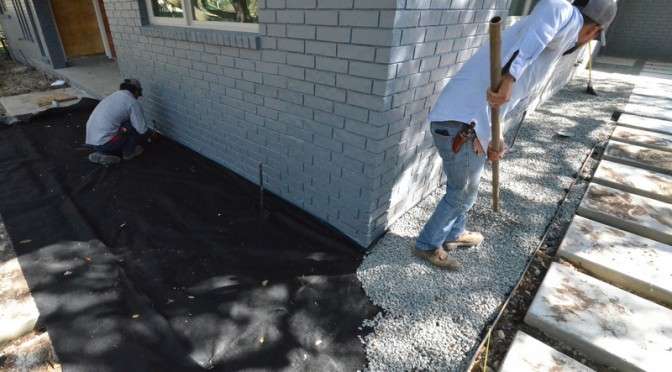 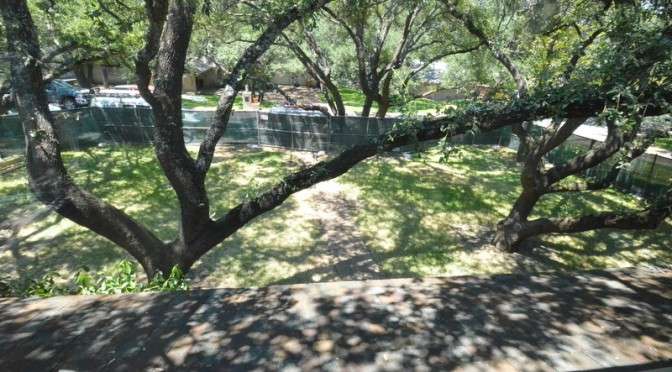 Above … Ranserve today erected a temporary fence around the house. It’s a signal that framing is nearly complete and a new construction phase begins, focused on systems inside the house.

The electrical team from Capstone Electric is first to arrive, pulling spools of cable through the second floor, tracing the electrical plan to rough-in outlets and switches. Steve from Capstone, Ron from Ranserve, and Steven walked each room upstairs, talking through which switch in what location turns which light on or off, whether outlets should be 42 inches above the floor at the countertop planned for the utility room, how high on the wall the TV will be mounted in the loft with a corresponding outlet, where to put how many outlets at the vanity in the master bath, which ceiling cans are actually integrated units that include LED lighting and ventilation for the bathrooms — item by item, detail by detail, getting it right with the walls open …

Separately, Jacquela and Steven met with Dale Markel at Landers Premier Flooring to explore options for wood flooring. Can we save the existing oak? Probably not …

Also separately, Steven approved a quote from Kyle Bacon at Elite Heating & Air Conditioning for what will be come a change order to the HVAC system — adding dampers and thermostats to the master bedroom and office, putting these two rooms into their own heating/cooling zones. This will help to make the master bedroom more comfortable and controllable at night, and help to deal with the heat generated by the computers and other equipment in Steven’s office.

And, Ben Feldt, structural engineer,  reports he walked the framing late last week. He will complete the documents “saying you passed” for the pending inspection by City of Austin. 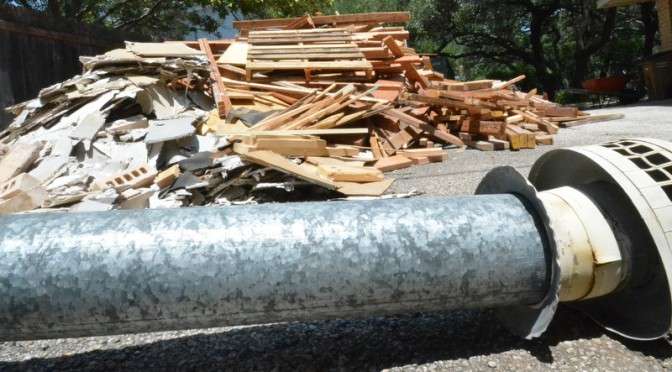 Above — the boneyard in the driveway continues to grow. It’s astounding how much old wood has been carved out Emerald Hill’s skeleton — undersized, termite weakened, insufficient for the house that Emerald Hill is becoming.

“A change order is work that is added to or deleted from the original scope of work of a contract, which alters the original contract amount and/or completion date.” Wikipedia.

Change order #1 adds $60 to the cost of construction — $50 to ensure this remodel project complies with Austin Energy Green Building standards and rules, plus $10 in “overhead & profit” to Ranserve to incorporate this change into the build plan.

Change order #3 adds $180 to the cost of construction — $150 to drain the freon from the two HVAC systems, then disconnect the units, plus $30 in O&P to Ranserve.

On the other hand, a future change order will credit about $550-650 back to the Leons, because the HVAC system is going to cost that much less.