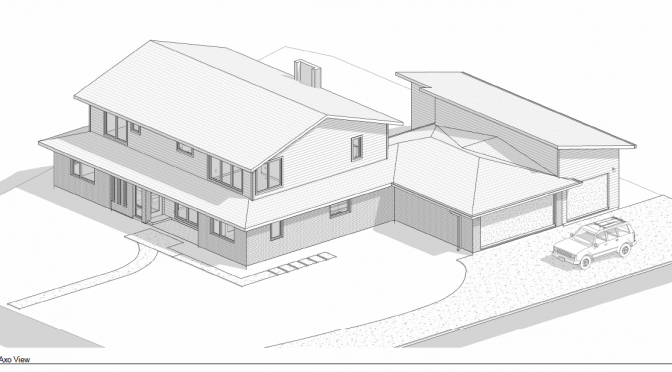 To make this remodeling adventure that much more scary, for Halloween, Jacquela and Steven today approved change order 16 — the addition of a third garage bay to Emerald Hill.

We have been working with Ranserve to refine the project and rein in costs.

Here’s what we approved:

You can order shed and garage kits online for about the same cost, plus construction labor and permits; or prefabricated metal buildings for a lot less money yet would also require more labor to tie together the two structures — and still need permits.

This gets the job done, adds tons of storage to the house, adds protected parking, adds workshop space for the power tools — and ties all the structures together, correctly.

Ranserve reports we will break ground the week of 2 November. 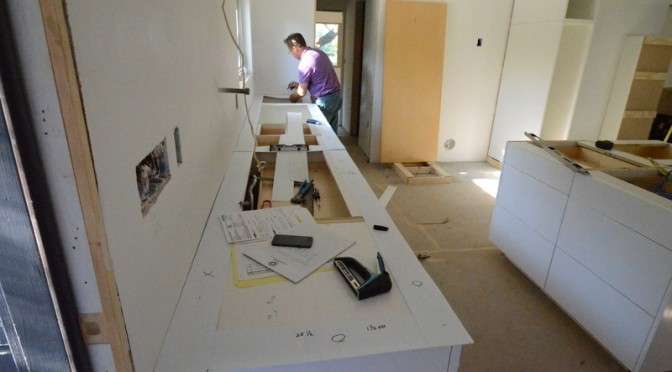 It’s a dual-milestone day at Emerald Hill. The first is the arrival of the carpenters. The second is … “Dimensional R” is in the house to measure for kitchen countertops.

R asks Steven to not use his name — and to not “capture his soul” by photographing his face. He stays off the Net.

Steven complies by posting the photo above, the back of R’s head as he templates for the quartz countertop at the run of cabinets for the dishwasher, sink and cooktop.

R uses strips of white plastic — not easily visible against the white cabinets — to template the counter. The first step is to determine what the overhang will be — 1/2 inch past the face of the cabinets, or 1/4-inch. Steven chooses the larger overhang to help keep dripping liquids further away from the front of the cabinet drawers and doors.

Next, R lays out the strips — and discovers that the cabinets are not perfectly square. Instead, they bow inward toward the wall all of 1/16th of an inch. He computes the math and compensates with a series of strips that are first tacked into place with a staple-gun and then glued together. Ron offers to ask Aaron to reinstall the cabinets — but R says that variance is nothing compared to what he has had to work around on other jobs.

Step by step, strip by strip, R lays out what will become the guide that Austin Stone will use to cut the quartz to size, deliver, and install.

One big step closer to finishing this remodel. Milestone! 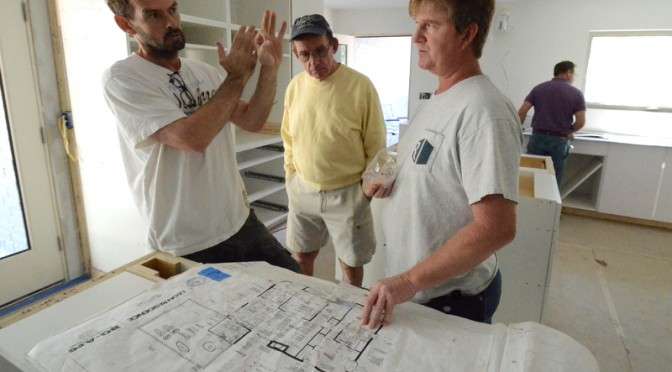 No. Not the first album from Karen and Richard Carpenter. Gag me.

It’s a dual-milestone day at Emerald Hill. The first is … Ron and Steven are turning over the house to, drum roll, please, the carpenters — Peter and Shane Morris, father and son, originally from north of London, fresh off finishing a 13,000 sq. ft. house somewhere else in Austin.

This is going to be fun.

Above, Shane, left, Peter, middle, and Ron Dahlke from Ranserve talk through each step of the casing, trim and other details they plan to start cutting and nailing tomorrow.

Today was planning day — walk the house with Steven, ask questions about how many shelves in this closet and how many rods, square edge on the window stool or “ear” that wraps around a drywall corner, baseboard options at the master shower, where to work around electrical panels, and more.

It’s time to “dress the house.” 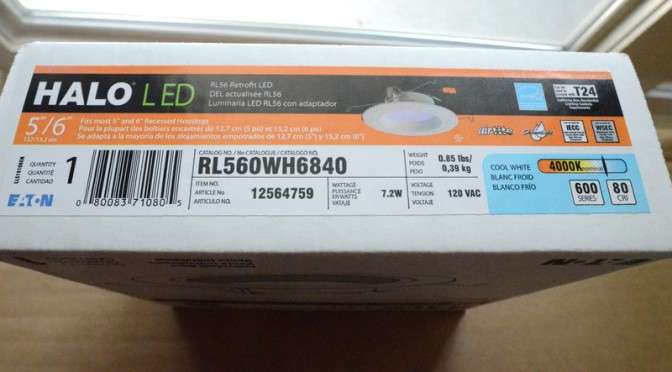 Continuing to catch up on daily progress …

Above, Capstone Electric is installing the 4000K 6-inch LEDs that Steven specced for the ceiling cans — cool white, not warm white. Steven sees the 4000K light as white, not yellow, brighter than the average bulb.

Tracy at Lights Fantastic is ordering all the other interior lights and ceiling fans. Tracy, Jacquela and Steven worked on this task for months. 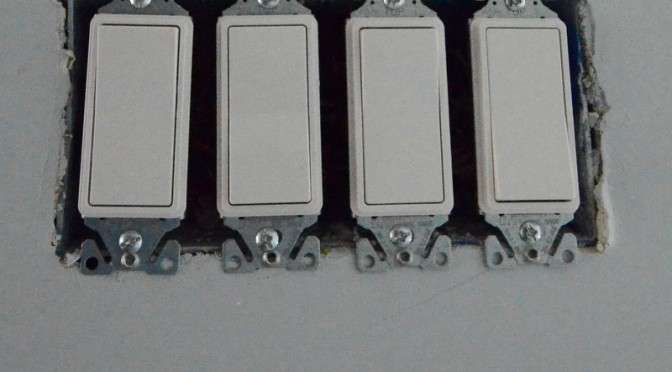 Above, the electricians are starting to install light switches. Here’s a bank of switches in the master suite. Can’t. Wait. To. Turn. On. Lights! 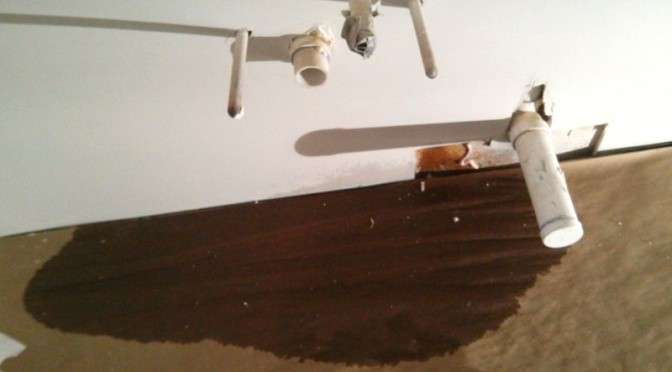 “… they run and hide their heads.” John Lennon.

24+ hours of nearly continuous rain. So far. Hurricane Patricia is shredding itself apart over the mountains of Mexico. Flood advisories are posted for Texas. Jacquela and Steven visited Emerald Hill. Saturday afternoon. First chance to see how the house holds up under a stress-test deluge.

Upstairs, all the ceilings and walls are dry.

There’s a slow dripping leak at the vent stack pipe in bath 3. It appears the stack is open to sky above the roof — and water is slowly traveling down the pipe. The paper protecting the tile floor is wet. As is a small section of drywall, wicking water up the wall from the tile. Steven alerts Ron and Mark at Ranserve via email and messaging. Jacquela locates a bucket in the garage. Steven puts the bucket under the pipe. Ron texts that the bucket should suffice until Monday morning, when he will determine what fix might be required. 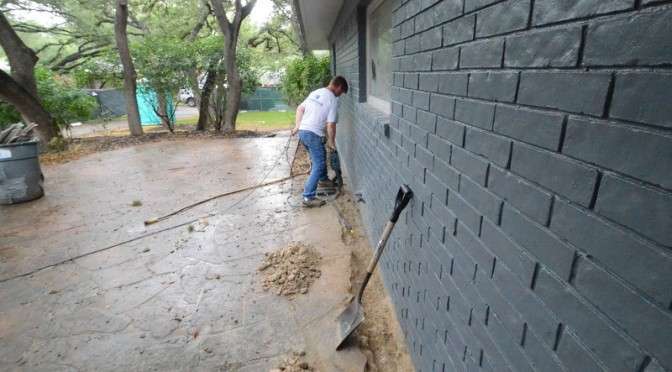 Above, late Friday, the forecast is for a weekend of continuous and heavy rain. Ron took it upon himself to haul out a jackhammer badly in need of repair to chip out more stone and concrete and base material from the deck outside the kitchen, carving drainage to channel runoff away from the side door to the kitchen. We know from the history of Emerald Hill that water has penetrated this corner of the house.

I’ll let you know when the countertop guy is coming out to measure so we can discuss overhang, edge, and support details for the island.

Once we finish trim, we paint, we do flooring,  we do misc issues, and then it’s a push to wrap up.

Steven observes — read that last sentence closely — “it’s a push to wrap up.” That is the first acknowledgement that this remodel is going to finish!