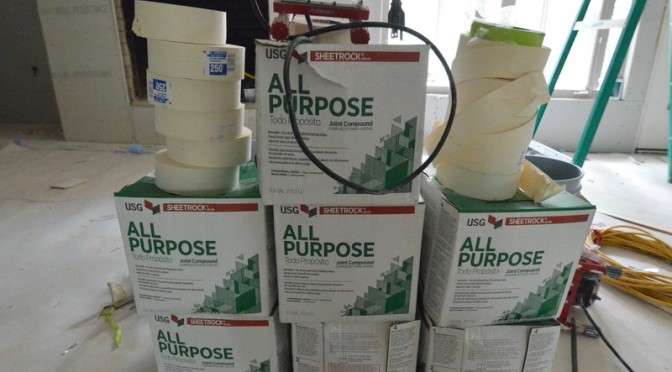 Gelipe and Anthony from Celis Drywall today prepped Emerald Hill and began to tape and float the drywall.

The process of taping and floating is a common task that takes place during the installation of sheetrock. Essentially, this procedure helps to hide the rough edges of the sheetrock where the sections join, creating a smooth look to the entire wall. Just about any type of drywall finishing project will require at least some taping and floating before the job is finished. Wisegeek. 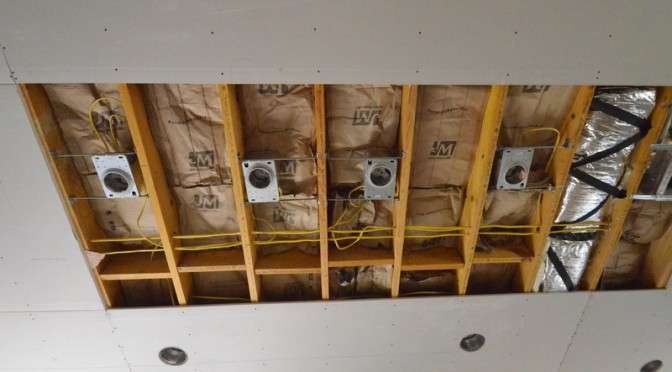 To solve the unbalanced lights above the island, Ron Dahlke suggested adding a fourth ceiling can. Steven approved.

Ron and Steve from Capstone Electric today repositioned the middle of the existing three cans, then installed a fourth can — all carefully measured to ensure the pairs are equidistant from each other.

Tomorrow, Ron plans to align the four cans in a straight line, then put the drywall back up on the ceiling.

When the drywall went up on the ceiling in the kitchen, Steven discovered that the three 4-inch ceiling cans for lights above the island were not equidistant from each other.

With the drywall install done, Ron and Cris took down the sheets of ceiling drywall over the island, exposing the cans and ceiling joists.

Ron and Steven dragged a 10-foot-long sheet of drywall into the kitchen, propped it up on two garbage cans, to simulate the location and size of the kitchen island.

Then we used three paint cans to approximate the location of the lights on the island, to confirm that the only way to center the middle recessed can would require cutting a ceiling joist and restructuring the two adjoining joists — a process that would also require inspections and approvals from the structural engineer.

Ron suggested an alternative approach — adding a fourth can, dividing the four cans into two pairs, and installing each pair to mirror the other. This requires no cutting of lumber, no structural engineer. It does require the electricians to add the additional can, but that’s easy. 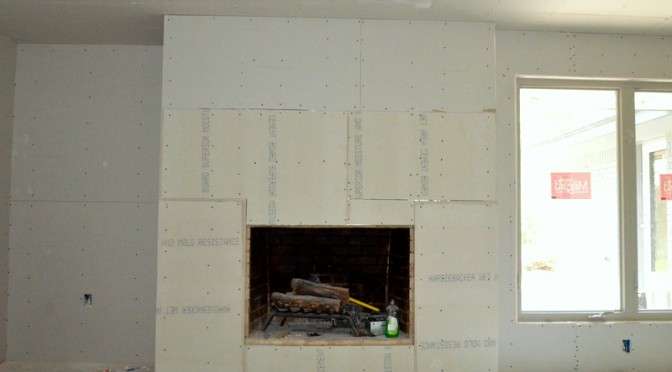 Steven makes this observation — the walls are now up, drywall is hung, and all the systems behind the drywall are roughed-in — electrical, low voltage, plumbing, HVAC, exterior, windows, inspection after inspection. This means we are advancing toward completion and moving in. The remodeling process feels like it is steaming ahead and sliding toward done. There’s still a lot to do — flooring, cabinets, taping and floating and priming and interior painting, plumbing and electrical finish out, interior doors and door hardware, etc. But we are no longer saving this house from itself. Demo is behind us. Framing is behind us. Discovering structural issues that must be fixed is behind us. We are shifting gears …

Catching up on several inspections completed over the past four weeks … 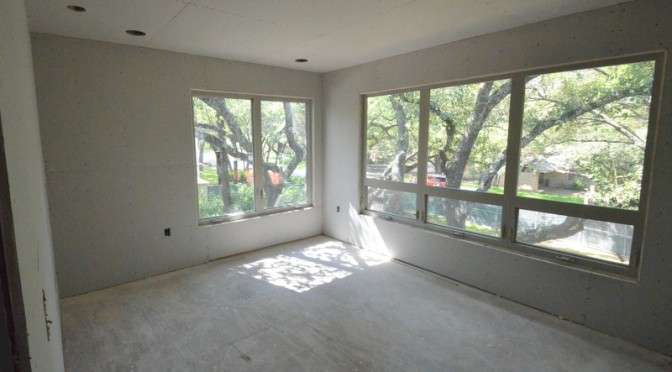 Above, what will be Steven’s favorite room at Emerald Hill — the master bedroom, drywall up, with “the treehouse” revealed as a room for the first time. If there is one room in the house done correctly, it’s the master bedroom, with the new side and front windows opening up the view into the trees.

The team from Celis Drywall today finished hanging drywall on all walls. Next up, Ron will order up inspection of the screw patterns to ensure they comply with code — each screw approximately eight inches from the next, with screws sufficient to ensure the drywall will not pop off or shift. Ron also plans to spend tomorrow, Wednesday, 23 September, the first day of Fall, working with Cris to tackle punch-list items before Celis starts to install corner beads and begins taping and mudding.

Here are snapshots as the Celis team of five installers hung drywall in the family room and kitchen, pantry, mudroom, office, library.