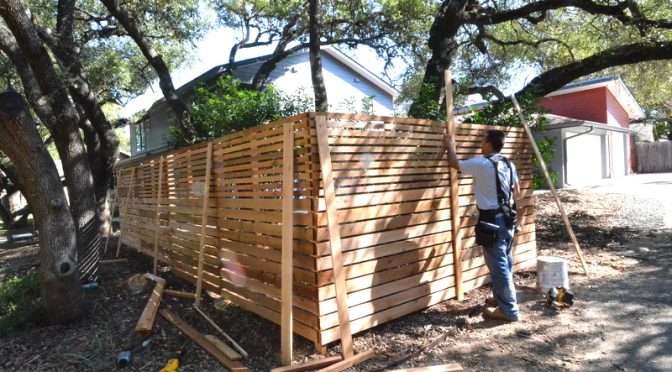 For Black Friday, Jacquela and Steven bought Adobe a new pillow, sized to fit inside her crate.

She slept on it one night.

The next afternoon, she delivered this editorial: 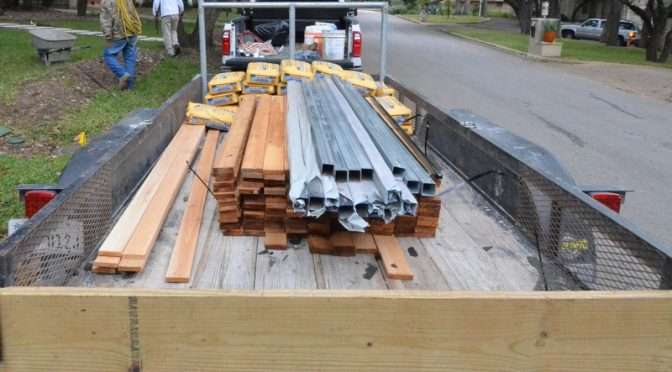 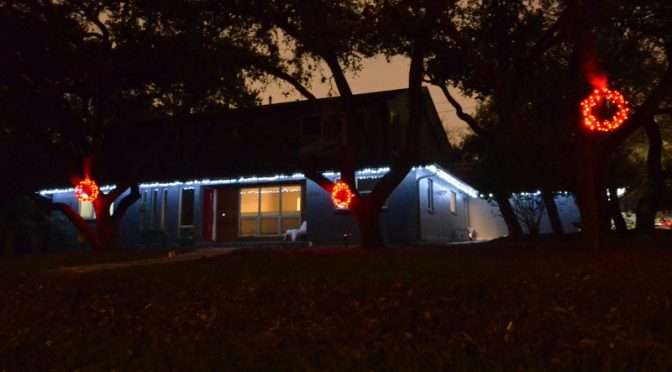 After lunch, Steven climbed the ladder into the storage loft in the garage — and began passing down to Jacquela boxes stuffed with holiday ornaments and lighting.

Working under the eaves and in the trees into the dark, surrounded by a herd of nearly 20 incurious and incautious deer, Jacquela and Steven hung white string lights at the eaves of the house and thee red-lit wreaths at the oak trees in the forest outside the front of the house.

It’s a start on the first major holiday in the house on Emerald Hill. 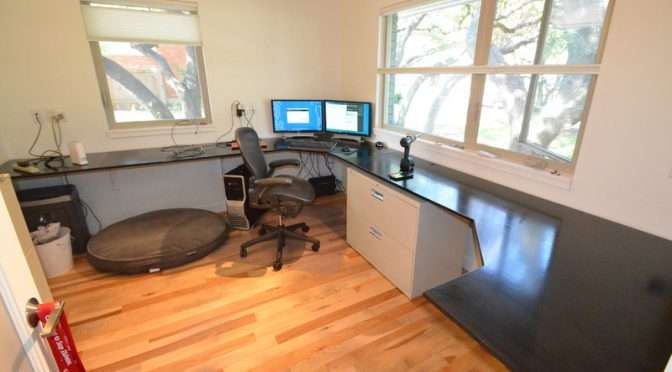 Steven trimmed the extra inches off the 8-foot-long desktops, spray painted the cut ends with flat black, then black satin, then two coats of clear satin polyurethane. That took 48 hours in the garage, waiting for paint to dry.

Saturday morning, Jacquela helped to carry the desktop modules into the office. Steven finagled all three panels into position, using 5/8-inch spacers to hold each desktop free of the walls — to create a “pass through” for network cables and electrical cords.

Lying on his back on the floor, Steven screwed 1/2-inch wood screws through the brackets and into the underside of each desktop, locking the wood panels into secure position. Jacquela was NOT available to photograph Steven working under the desks.

Everything got wiped down and cleaned up.

And, then, finally, it was time to bring the desktop computer back into the office — and power it up.

In photo above … Steven’s desktop computer set into place at the southwest corner of the office — booted up, connected to the Web. With Adobe’s dog bed tucked neatly under the side wing — because the dog is barely separable from Steven. 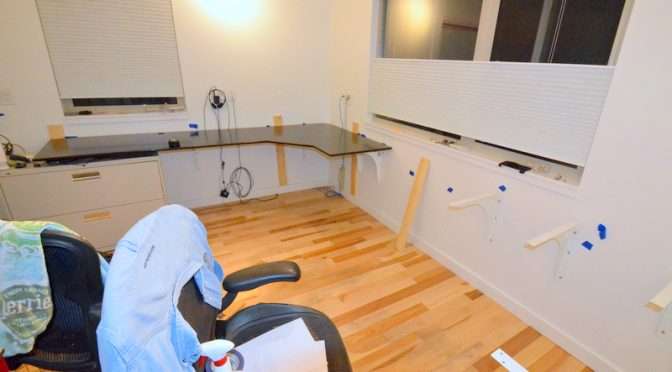 The Leons came back from Thanksgiving dinner with the Cooksleys and Steven set to work burning off the calories.

Steps in the process — locate the studs behind the drywall, mark them with blue painter’s tape, calculate the height for the desk at 30.5 inches per guidance from the web on desktop ergonomics, measure out a level line around the walls, then mount the brackets level and plumb that Steven ordered last week — the brackets arrived the day before Thanksgiving — while also working out where to not put brackets in order to be able to slide two-drawer file cabinets under the desktop and between two brackets.

After that, Jaquela helped Steven carry in from the garage two of the desktops — test fitting the parts to calculate what has to be cut off.

In photo above, one of the desktop pieces resting in position — the plywood is now stained black, using a black stain that is premixed with polyurethane. Then Steven applied two coats of clear satin polyurethane atop the stain. From a distance, it’s perfect. Up close and personal, it’s not perfect, but it should endure years of abuse from keyboards, monitors, pens, pencils, paper, glasses, paperclips, and countless projects that trundle into Steven’s work.

Meanwhile, out in the garage, Steven measured everything three times, then cut the two larger desktops down to size, and began touching up the cut ends — first with flat black spray paint to cover the raw cuts, then spray black satin stain mixed with polyurethane to blend with the surface of the finished desktops and, eventually, two coats of clear satin polyurethane sprayed over the cut ends to protect eveything. Sometime as early as tonight, the desktops will be ready to transport into the office for permanent mounting. 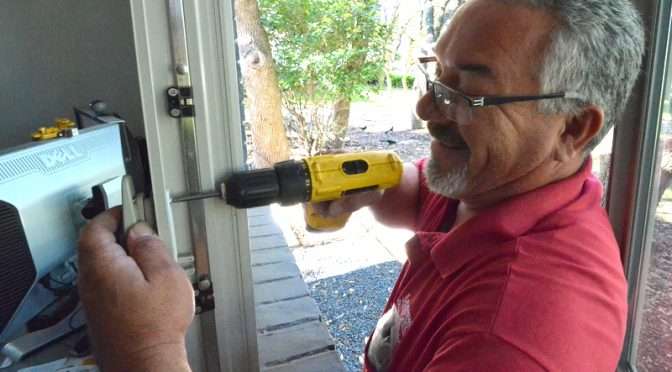 Now that the garage floor is clean and clear of obstacles, Steven moves on to his next project — staining the plywood that will become the desks in his office.

Actually … These are the plywood desks from his old office at Sea Eagle. Steven saved the wood to re-use it. Thinking ahead, as always.

Today, he sanded the bare wood bottoms and patched the holes with wood filler, and sanded what were the polyurethaned desktops, giving them “bite” for an application of stain or spray paint.

The desktops will be black — drama against the white walls.

The shelf brackets that will brace the wood to the walls are already on order. 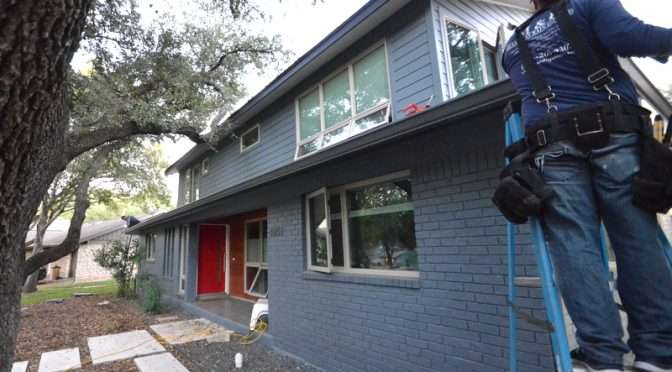 We’re coming up on nine months in the house. Startling to think time passes that quickly.

A call to M&R Seamless Gutters brings them back to Emerald Hill to calculate an estimate, which Steven approves. Adriel and Simon arrive about 4 pm Wednesday. The sun is already low in the Fall sky. They set to work. As it got darker, Steven fished a work light out of the garage to help them see and work safely in the dark. 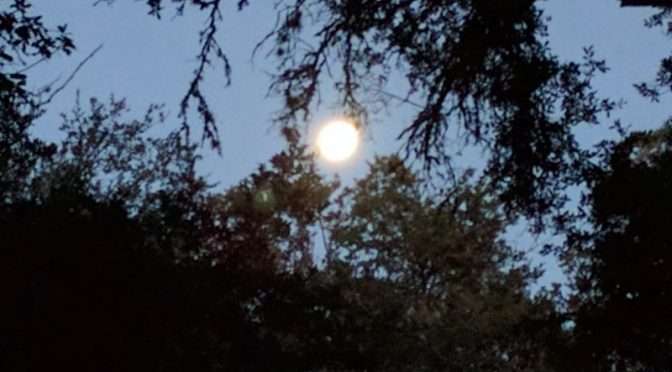 Not the best photo. The phone camera did not resolve Luna. She was too bright.