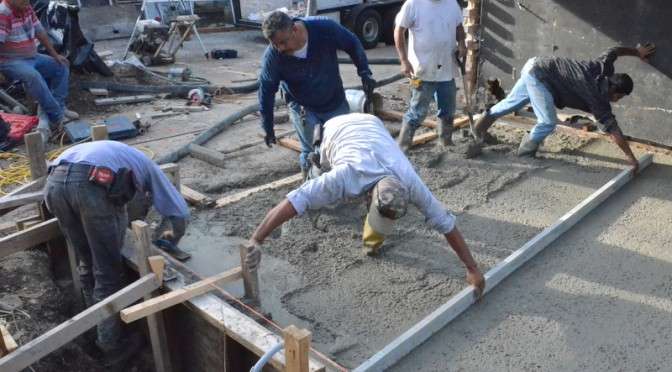 Gilsa Construction today poured the concrete slab of the new garage bay – and the pad step in front of the front porch. At noon, the form for the pad step at the front porch. At noon, Gilsa polishes off the forms for the garage foundation. At 12:30 pm, the first of two cement mixers backs into position behind the diesel-powered pumper made by PutzMeister. Steven wonders if this is an unfortunate naming – the “master” of stupid, inept people? Laying out the hoses and clamps. First pour at the back corner of the garage foundation. Mauricio from Gilsa visited to show Steven a sample of the black rock that will be used to landscape the deck off the kitchen and behind the garage. Swinging around to the side of the garage closest to the back door off the kitchen, pumping concrete into the footing. Vibrating air pockets out of the concrete. Feeding concrete into the hopper at the back of the pumper, from the mixer. At 315 pm – the first mixer is drained and has driven off. Most of the footings are in, with the exception of a section along the existing garage wall. Beginning to smooth the concrete down to floor height. The slab, smoothed after the first pass with the aluminum float. Part of the Gilsa team splits off to pour concrete at the front pad of the house, by wheelbarrow, by hand. Shoveling the concrete into the corners. The garage slab after the second pass with the aluminum float. The aluminum float in action. Working the last of the pour at the front of the garage. Water rises to the top of the concrete as it starts to cure. What the back of the new slab looks like from above, shot from what will be the train room on the second floor of the house.

At 430, it’s time for Steven to take Jadin home from school. Mauricio from Gilsa is on his way with worklights for the team to continue working the concrete into the night.