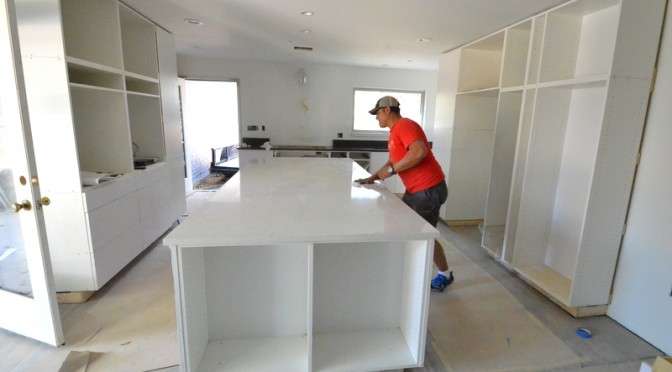 Here are lines from Little Gidding by TS Eliot that Steven asked to be read when Jacquela and Steven married 20 years ago:

We shall not cease from exploration
And the end of all our exploring
Will be to arrive where we started
And know the place for the first time.

We come today to where this remodel began. The kitchen. We know it for the first time.

It takes minutes to install a countertop on This Old House and other home improvement shows. Today’s adventure at Emerald Hill debunks those happy breaks between commercials where installers go from demo to granite in before and after shots. In contrast, we began at 9 am and ended about 3 pm — but these six hours are some of the most consequential since ripping down the drywall. We have kitchen counters.

The material is quartz — shadow gray at the kitchen sink and cooktop, fairy white at the island. These are selections that Jacquela and Steven approved 16 July 2015 — four months ago. One of the first decisions we made.

With the cabinets mostly installed, with the countertops installed today, the idea around which the kitchen is organized, the idea that Steven first proposed in September 2014, 14 months ago, drawing sketch after sketch of how to get the kitchen we wanted into this house, that idea is finally made physical. We knew when we bought the house that it needed a new kitchen. We wanted to take out the wall between the existing kitchen and the existing family room. Putting in the new kitchen required that we put in new copper wiring. Several architects and builders advised that the City would require us to rip out all the original aluminum wiring. So … what was supposed to be a new kitchen remodel became gutting the house down to the studs. Which gave Steven the ability to turn the kitchen 90 degrees — from the original east-west axis to, instead, north-south, taking out the wall, uniting the kitchen with the family room — and also creating a walk-in pantry.

Everyone who has worked on this house has worked to make this day possible. Thank you.

It took more than five hours to install the cooktop/sink countertop — meticulous and careful work. By contrast, the 5-foot-by-10-foot slab of quartz for the island goes in in less than 30 minutes — no cuts required. This beast weighs more than 400 pounds. Efrem, Marcello and Hazil moved deliberately, rehearsing each step.