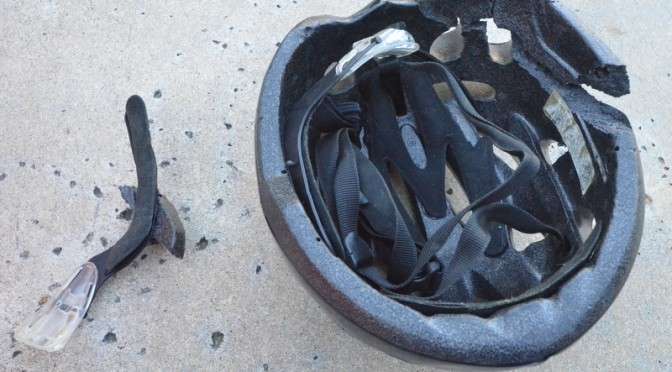 One year ago today. I’m biking through the traffic circle at Bee Cave Galleria. Car coming in from 71 runs the Yield sign. Doesn’t slow. Doesn’t stop. I brake. Hard. Back tire hits a wet patch of asphalt. Bike twitches out from under me. The helmet cracked when I hit the ground. I blacked out. There was a woman in another car yelling at me when I came to — “he didn’t stop,” she said. And she drove off. I got to my feet. It took a while. I rolled the bike over a curb into the Chile’s parking lot. Pulled the phone out of the back pocket of the jersey. Called Jacquela for help. Apparently I called her twice. I have no memory of that. I do remember wondering why no one was running over to help from the 24-hour emergency care mini-hospital across the street. I do remember being not sure which way was home.

Jacquela arrived. She took me to the emergency room. X-rays confirmed the concussion. No one examined me for other injuries. That would come four days later, after a plane ride to NY for Thanksgiving, when I could not get out of bed and Ellen, my sister in law, and Andy, her brother, both nurses, diagnosed at least one broken rib. Back in Texas, the doctors discovered four.

There was a lot of pain.

It hurt to breathe.

Three weeks later I got the bike repaired. Took a short ride. Kept my balance. Parked it. Two days later, pedaled for a mile and back.

There are days, now, when I’m tired of fighting against the wind at mile 10 or 12. Last week, I did a 20-mile ride — two laps around the Galleria, through that traffic circle, past the church, and around again.

I’m not done yet.