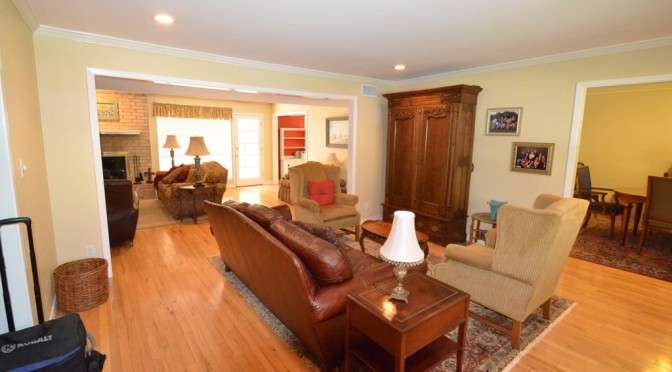 Above, the original oak flooring as we walked the house at inspection, with the furniture of prior owners.

This is tale long coming. It hurts.

One of the reasons we bought Emerald Hill was the wood flooring.

Today, Steven decided to replace the oak flooring with new hickory engineered flooring — with huge assistance from Mark and Ron at Ranserve, Dale at Landers Flooring, and budget wizardry by Kathleen at Ranserve.

When we bought the house, Steven and Jacquela planned to keep the oak. In fact, we planned to extend the oak into bedrooms 1 and 2 downstairs, which came with carpet squares on bare concrete slab. We also planned to install oak in the upstairs hallway, and then run it into the master bedroom.

Hard surfaces. Easier to clean. Oak is beautiful. And throwing it out is not conservation.

We budgeted the remodel to save and refinish the oak.

The first thing Ron did when we gave him the key was protect the floors with heavy cardboard.

Shortly after, before demo got underway, Dale inspected the oak. He advised against trying to refinish it.

Last week, Friday, 31 July, we got a second opinion from Wendy Jones-Shelton at Windham Interiors. Yes, there was enough oak in the wear layer to sand out the old sealer that had yellowed over more than a decade, then “feather” in new oak to extend the wood further into the house.

But this was not high-quality engineered wood. And, it is 3-ply, 2.25 inch-wide planks. According to Wendy and Dale, manufacturers don’t make a lot of this nowadays, making it hard to find, expensive, and, equally important, extraordinarily difficult to blend with old flooring.

We explored options — whitewashing the oak, which would show every footprint; staining the old and new woods, trying to blend them; oil or water-based polyurethane …

That became clear as Steven and Jacquela met 3 August with Dale, talking through options, knowing we needed to select a replacement.

The hickory totals approximately $18,000 — which is a lot more money than the $13,000 we budgeted for refinishing and feathering in new — plus whatever it costs to also build out the new stairs with hickory.

As of Wednesday, 5 August, Ron figured out and discussed with Steven the stair plan — a combination of hickory treads and hickory plywood.

Mark, Kathleen and Steve estimated additional costs of more than $10,000.

Yes, there’s a contingency fund built into the budget.

But … Ron, Mark, Jacquela and Steven have been diligent all through this process, from first handshake to demo to framing to today, choosing quality products that function well, look good, but are not the most expensive route to saving Emerald Hill from itself.

Which is where Kathleen proved her wizardry — reporting that we are so far not spending about $10,000 on framing materials, some framing labor, and other line items.

Mark and Steven agreed to re-allocate the savings to pay for the hickory.

Starting next week, Ron and Cris from Ranserve are going to scrape the oak up off the slab, trying to save as much of it as possible to donate to Habitat, in hopes of giving the oak a second life in a new home. Dale will ship in the new hickory. Ron will demo the existing stairs, which are not built to code. The framers will come back to build the new stair structure. And at some point after that the new hickory will be glued and nailed down, then protected with hardboard.

This adventure also sets back the schedule by one week.

It is dispiriting to lose the oak. And to lose a week. At the same time, it is exciting to see in your mind’s eye the house with the new hickory. To turn a cliche — bitter, sweet, expensive.