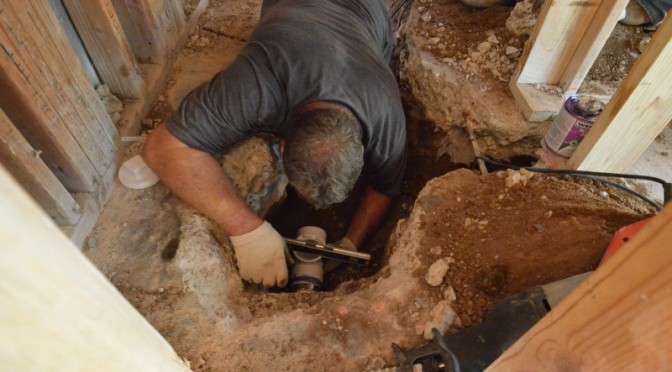 Surprise. Ron has the plumber and the electrician in the house at the same time.

Art and the team from Custom Pluming continue to jackhammer away at the foundation and install PVC pipes. That’s Art in the photo above, leveling the PVC pipe for the drains in the mudroom

While the plumbers are deep in the trenches cut by jackhammers … Sean and his team of electricians are on site, two days early, installing ceiling cans, nailing up blue electrical outlet boxes at proposed locations.

Ron pulled Steve into the kitchen to talk about the ceiling cans over the aisles. There’s a triple-beam almost precisely where the plans call to install three 6-inch LEDs. With help from Sean, we measured it out with two tape measures — the cabinets extend 24 inches from the wall, the aisle runs next to the cabinets, the center of the aisle is just about directly under one of the three beams in the triple beam … but if we turn the cans 90 degrees and slide them all the way over, Sean is able to install the cans over the aisle, one inch closer to the cabinets, putting the light beams from the can overhead and closer to the cooktop and sink, providing more light. And all this aligns with the ceiling cans that will be installed in the adjoining pantry and mudroom, establishing a straight line of overhead lights.