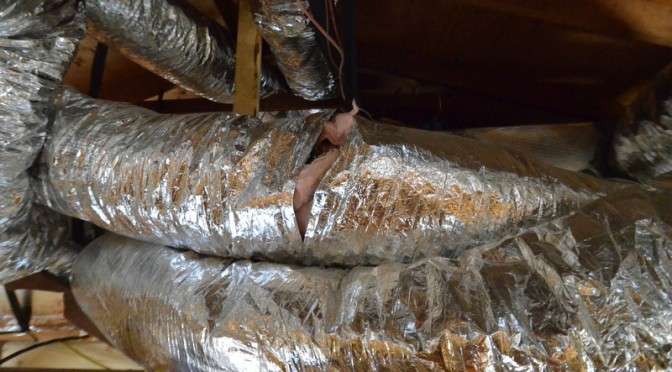 Ron Dahlke and Steven scheduled this morning to audit the duct work in the attic.

Steven does not approve.

When the ducts were first roughed in a couple of weeks back, Steven identified and discussed with Ron several tangled ducts and errors that required correction. Ron and Mark Rehberg reviewed Steven’s notes, discussed the issues with Ross Britton, the HVAC consultant. Steven is told that Ross concurred with Steven’s assessment, and ordered up corrections by Elite, the HVAC installer.

That was then. Today is the first chance to stick our noses into the attic — and come away knowing that Elite has a lot more to fix — a second time.

At 4 pm, Ron reports he met today with Kyle from Elite — and Elite is coming back Thursday for a third attempt.

Above, one of the ducts in the attic is ripped open. Why didn’t Elite spot this and fix it?

There are other fixes required to exhaust vents that circle 180 degrees, then split, and then each split circles back 180 degrees to end up reversing the original airflow — when relocating the split six feet would result in two straight runs. That’s all the thought and planning needed.

Steven will not approve the HVAC install until all the fixes are completed and he again audits the work.