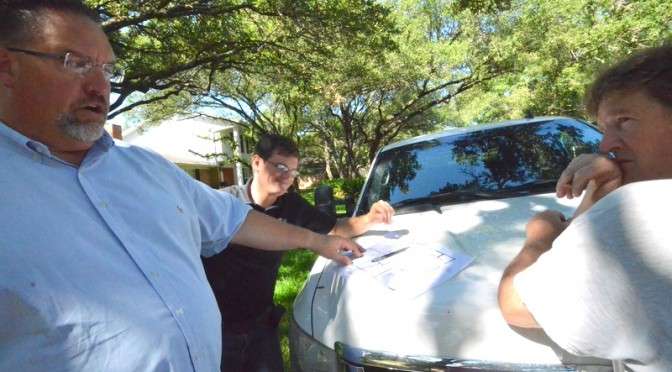 The HVAC team convenes a planning meeting on the hood of Ron’s truck … Ross Britton from Four Points Enterprises, at left, Kyle Bacon from Elite Heating & Air Conditioning, in back, and Ron at right.

Installation of the system and ducts will begin Friday, 25 July.

Everyone assures Steven that 4 tons of Carrier heating and cooling equipment, one system, one zone for the first floor, one zone for upstairs, will heat and cool the house comfortably, efficiently, affordably — with 4 tons and no more required if we are to comply with the Austin Energy Green Building Program. Steven hyperventilated late last week, reviewing the specs for the umpteenth time, realizing he read the quote as two systems, two zones. It’s possible to go this route, but it adds significant maintenance — two systems, not one — and it would pull a lot more electrical power.  Which is oversimplifying a lot of higher math — HVAC configuration requires physics and software. It would also disqualify the house from the Green Building program.

But … they strongly recommend that Steven approve the addition of an Aprilaire unit with humidity and temperature controls for proper fresh air ventilation and air exchanges. Cost is $400. Steven approves and notifies Kathleen at Ranserve via email.

Kyle, Ross and Ron mapped out the chases and ducts. They are adding a chase in the loft to move air into bath 2 below, and a second chase in the master closet to move air into Steven’s office and the pantry on the first floor. There will be no furr downs, no dropped ceilings, no claustrophobia. Steven will not be able to stand his 5-foot-9-self on the floor, reach up, touch the ceiling. And, bonus, Kyle does not need to run equipment in the two closets that used to house the old HVAC systems. The Leons just gained two closets for storage.

The other decisions are minor — shifting the position of an integrated light/vent unit in bath 2, which also requires the addition of another ceiling can — but each decision cascades down the tree; routing exhaust vents through the framing; fixing the location of the vent for the kitchen exhaust hood.