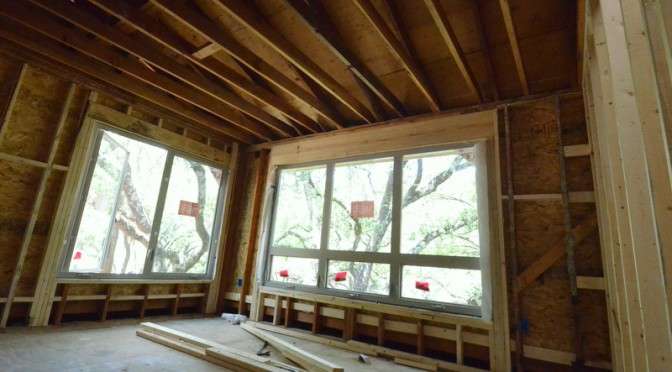 The first time Jacquela and Steven walked the house, before we bought it, we marveled in the master bedroom over the view into the trees from roughly 12 feet up in the air. A squirrel stared back at us from the limb of an oak at least 24 inches in circumference. Wood shutters cut off the view from the bottom half of the windows at the front of the master bedroom. Additional wood shutters closed off the windows on the south wall of the master.

We set out to change this as we turned concept into plans with architect Brent Grinkmeyer. Steven borrowed a stick of sidewalk chalk from Jadin to sketch dimensional outlines on the walls for potential windows. Colleen Ferrell from Martel Windows & Doors guided us to fixed uppers and operable awnings below — a window arrangement that we elected to repeat in other rooms throughout the house — an organizing theme to help unify the house as we saved it from itself.

Today, for the first time, the new front and side windows are installed in the master.