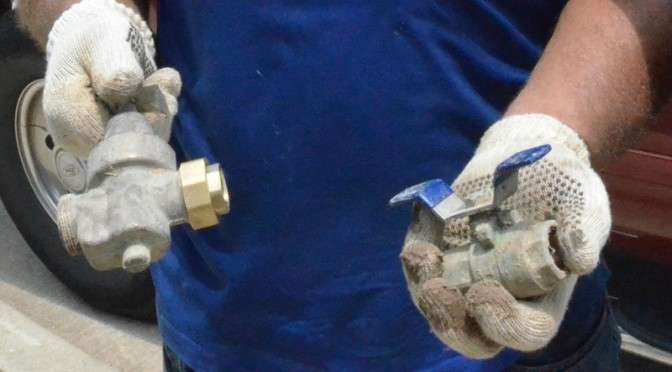 Fourteen hours after he left in the dark, Barry Samsel from Custom Plumbing is back at Sea Eagle View to cut out the Pressure Relief Valve that he suspects failed, to replace it.

Did fluctuations in pressure caused by the dying PRV trigger the water heater to blow out? Did a water heater failure cascade back to the PRV? Two systems separated by 50+ feet broke down in the same 24 hour period, connected only by water; that’s a mystery wrapped inside an enigma.

Dig. Wrench to remove. Send Steven to Lowe’s to get a replacement for the butterfly shutoff valve that is not loaded on Barry’s personal Ford 350. Squeeze the new assembly into place with a 2×4 lever applied to city meter, carefully. Wrench to install. Test. Test again. Test a third time.