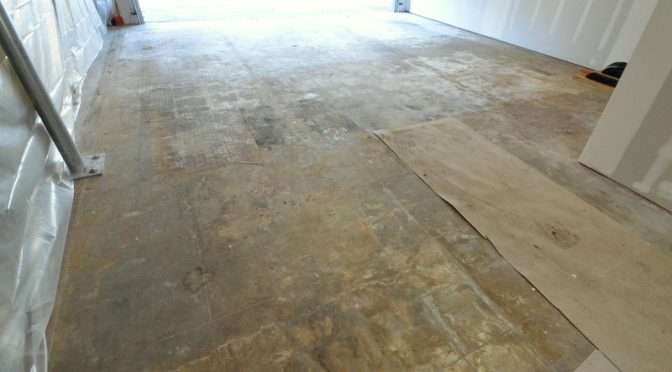 We built a third garage bay with a storage loft above and enough space at the back for a workshop.

But the floor of the original garage was covered with what we suspect was cheap, 50-year-old, red linoleum tile that was glued down.  Someone apparently used the garage as a rec room during the history of the house.

Ranserve hacked away at the tile and glue for days. The glue just would not come up.

We opted to cover it with roll-out floor mats that we used at Sea Eagle, and we used heavy cardboard Ramboard to extend a walking path to the cars from the mudroom door into the garage — because if you walk on the glue, you will stick to the glue and drag it all over the house and into the cars.

With a recommendation from Ranserve, Steven hired Monty Patton and Krystal Flooring to grind clean the glue and top layer of concrete.

Monty, Jose and Roberto arrived about 930 am and finished about 4 pm. A “before” shot. The yellow and brown crud is the glue. Heavy cardboard still laid on the floor as a walkway.

And then we let it dry overnight.

This is the prize-winning after shot of a floor that has not been this clean since the house was first built.