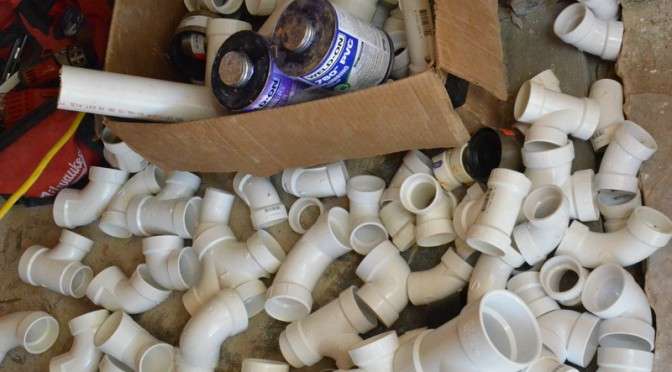 Emerald Hill passed its first plumbing inspection — rough-in at the first floor slab — the pipes that will be encased in new concrete as the slab is patched and sealed.

In the kitchen, Barry, Art and crew configured this new vent stack at the kitchen sink. They tied into the existing stack, ran the PVC pipe in the gap between the back of the exterior brick and the new vertical studs, up the wall on the opposite side of the studs, into the wedge under the lower roof, through a stud bay, up to the second floor, through a second stud bay and then up to the second-floor roof. This is the art and science that ensures “air behind water” without cutting apart the structure of the house.

Why do we not cut structure?

The original plumbers cut so much structure from two parallel beams that everyone wonders how the house did not collapse. It explains why the second floor dipped. Ranserve and the framers have now “sistered” in an LVL to hold up the second floor.