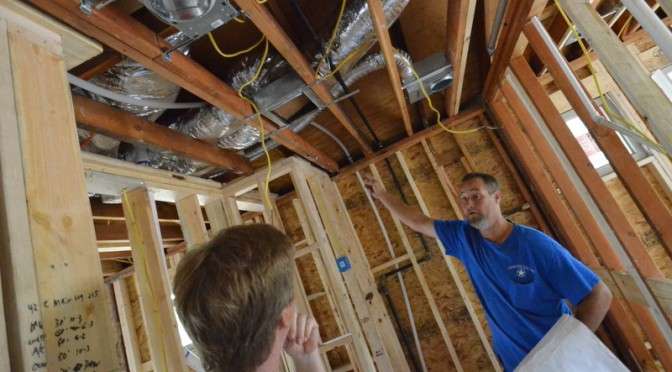 Above … Ron Dahlke from Ranserve, left, Steve from Capstone Electric, right, and Steven, not seen, because he is taking the photo, convene for day 2 of the electrical rough-in walk through the house upstairs, in bath 3.

See the “can” — a rectangular metal box – mounted at the rafters over Steve’s head.

Wikipedia defines a “can” as a “recessed light or downlight (also pot light in Canadian English, sometimes can light (for canister light) in American English) is a light fixture that is installed into a hollow opening in a ceiling. When installed it appears to have light shining from a hole in the ceiling, concentrating the light in a downward direction as a broad floodlight or narrow spotlight. There are two parts to recessed lights, the trim and housing. The trim is the visible portion of the light. It is the insert that is seen when looking up into the fixture, and also includes the thin lining around the edge of the light. The housing is the fixture itself that is installed inside the ceiling and contains the lamp holder.”

The “can” over Steve’s head is in the wrong location. Instead … see the “can” over Ron’s head at left, and the box for an HVAC vent above where Steve is pointing? All three fixtures should instead align in that one bay between the two adjacent rafters. To make this happen, the HVAC vent needs to shift closer to the can over Ron’s head. Then, on the other side of the vent, opposite the first “can,” Steve has to remount the “can” that is currently located over his head. This second can must be located outside the tub shower that will be installed at the back wall. Why? It’s actually a can that combines both a fan and light. We need two lights to illuminate the bathroom. We need the fan to exhaust humid air from the bathroom when someone is taking a bath or shower.

Meticulous detail. Careful planning. Explanations of logic. Compromises with electrical codes. Step by step, we work this all out over 20 minutes.

But we’re not done.

See the white tube running across the ceiling and down the wall. That’s PEX — defined by Wikipedia as “an acronym for crosslinked polyethylene. It is a flexible, durable, proven piping product that has been used in plumbing systems for more than 20 years. PEX tubing won’t pit, scale or corrode and, because of its flexibility, it also offers potential freeze-damage protection.”

The PEX line currently runs over two silver HVAC ducts and the exhaust fan duct in the ceiling, potentially restricting airflow. It will be relocated under the HVAC ducts. The fan duct will shift when Steve the electrician shifts the combo fan/light can.

Also, Ron is going to audit the installation of the HVAC ducts. Steven sees kinks, compressions that will reduce airflow, and too many ducts crammed into too small a space.

From bath 3, we shifted to the laundry/utility room next door, then the master bath. More than an hour later, we made it downstairs. This is the exhaust fan installed in the ceiling over what will be Jadin’s shower in bath 2.

It’s not just a can light. It’s also an exhaust fan. With a humidity sensor that automates operation. Take a shower, it turns on the fan and blows the hot, humid air out of the house. When the humidity level drops, the sensor turns off the fan. Human interaction is not required. Which is important, because Jadin is a teen — and teens take long, hot showers.

See the silver exhaust duct? It takes a tight 90 degree turn out of the can, which constricts airflow. Then the duct rises up to clear a rafter, continues up over a run of pipes that vent the plumbing stack, to provide air behind water — the venting that is needed for water an waste to drain down pipes and out of the house.

So far, so good. But … where the duct crosses over the plumbing stack, it dips, and then it rises to the vent stack in the roof, which is where the wet air would vent out of the house. Except … because the duct dips, water is going to collect in the dip, plug the vent. No air is going to escape the house. And the duct will just collect more and more water over time.

Ron says he will audit all the HVAC ducting for errors.