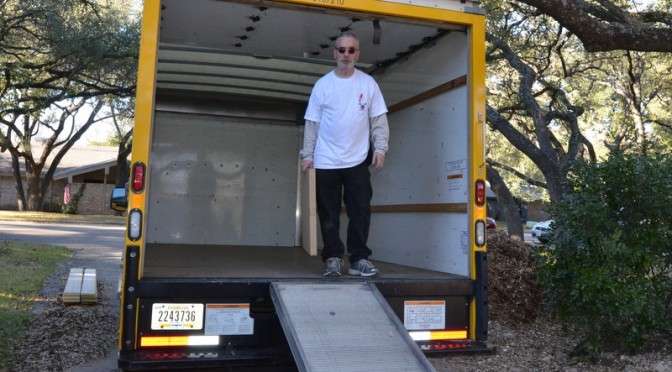 A milestone. We are moving boxes to Emerald Hill.

Jacquela and Steven rented a truck from Penske at Home Depot. We hired Kevin and Matt for the day from Ranserve — and Matt’s friend Myles. We backed the truck down the driveway at Sea Eagle View at about 9 am. And went to work emptying the garage of stuff in boxes.

By 10:15 am we were on the road to Emerald Hill for the first run of the day. Steven assembled the metal shelving — powered by the revelation that cheap stuff does not go together easily or well — pulled from Sea Eagle View. Kevin, Matt and Myles unloaded the truck, nearly filling one 40-foot side of the new garage bay.

Then it was time for lunch at the taco truck opposite Anderson High School.

Back at Sea Eagle View, we loaded the truck with boxes from the train room, the toy room, the flex room, the guest bedroom and the great room. There was still room on the truck, so we emptied out the storage closet next to Steven’s office, and boxes under Steven’s desks. Matt crammed that truck to the ceiling, packing boxes in tightly.

Jacquela climbed into the cabin of the rental truck to ride shotgun while Steven drove the second run to Emerald Hill.

And we went to work unloading the truck.

Jacquela took a break to take a couple of pictures.

Above, Steven takes the last box out of the truck at the end of the second run.