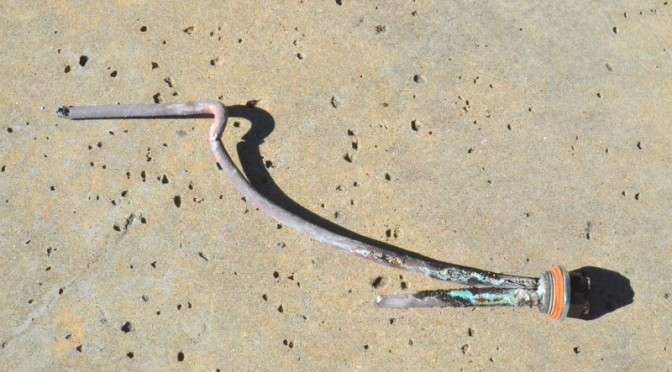 Steven did not travel to Emerald Hill yesterday, 8 December. Instead, he wrestled a plumbing mystery at Sea Eagle with help from Albert and his son Cory, dispatched by Barry at Custom Plumbing.

For the past three weeks, the shower in the master bath has been luke warm. It starts out hot, but quickly fades in a minute to warm. The water is heated by the new tank installed back in July by Barry.

In October, the water heater tripped the circuit breaker. Steven reset it. We went back to normal.

We woke to no hot water on 16 November. Steven reset the breaker — and we had hot water.

By 30 November, the tank was generating only lukewarm water.

Barry asked Steven to replace the breaker, thinking the problem is electrical. Scott from Capstone inspected the breaker, did not see a fault, replaced it anyway.

Steven and Jacquela tested this new configuration for several days — and on 5 December requested that Barry inspect the tank and, possibly, replace the heating element inside the tank.

Above, Barry discovered two problems. First, that snake-like assembly is the upper heating element from the water tank. It is fried. That explains why the tank was generating only lukewarm water, relying on only the lower heating element.

The second problem — the recirculating pump would work only if Barry whackked it with his pipe wrench. Hard.

We suspect there was an electrical surge or failure of some kind that took out the heating element and the recirculating pump back in October, when the breaker tripped for the first time.

Albert drove over to Ferguson’s to purchase a new recirculating pump. He and Cory drained the tank and, by blowtorch, disassembled all the pipes at the bottom of the tank.

Albert and Cory buttoned up everything by mid-afternoon and drove off.

Steven came back about 8 pm from the meeting of the MUD 5 board — his last as a board member; he resigned. There was a hissing in the garage.

Steven tried to stay out of Albert’s way, but instead wound up providing an extra set of hands. Albert had to turn off water to the house to re-solder the joint — even with the shutoff valves cranked there was still too much water dribbling through the pipe for the blowtorch to properly melt the solder at the joint. Albert also opted to add a second shutoff valve to the bottom of the tank, allowing us to isolate the tank at either end of the pipe run, if we need to cut off the water again, remove the pipe assembly and new recirculating pump, and work on everything away from water.

At 1 am, Steven rechecked the work before going upstairs to bed.

Steven and Jacquela woke to hot water and a functioning recirculating pump. Steven reported the leak to Barry. Custom Plumbing is scheduled to work on this again Friday, 11 December.